Why Your Inner Critic Is An A**Hole

Let me tell you a little story about a bully; a bully named “your inner critic.”

Let me tell you a little story about a bully; a bully named “your inner critic.”

It’s a grey and rainy Sunday morning. I’ve got my delicious hot coffee in hand, a blank word doc in front of me, and a hangover of regret and disappointment about how I spent my day yesterday.

I wish I could say I’ve been staring at the blank screen for hours, at least then I’d be “doing something,” but that’s not true.  The truth is, this is the first time I’m sitting down to try and write anything for this blog post and it’s due tomorrow.

Okay, I did “try” to write yesterday.

I opened up a blank doc.

I wrote the title of the project: MyWellbeing blog.

I wrote the working title: “Why your inner critic is an asshole”.

I sat there for about two minutes, let out a sigh, and then closed my laptop and turned on the tv show The Hills.  I watched an entire two seasons from my couch, rather than writing this blog.

Throughout this process, someone in the background was talking: “What’s wrong with you? Why do you always do this? You’re so lazy! You should have written this weeks ago, you had all the time in the world.”

As the day wore on, she continued… “Heather why are you still watching this stupid show? It’s not even that good.  Seriously, why can’t you turn it off? Why aren’t you doing what you should be doing? Look at what you’ve been eating all day! What’s wrong with you? Stop snacking on all this crap. You’ve eaten a whole days’ worth of calories and it’s barely past lunch.”

“Probably not. Because most people don’t spend as much time as you do wondering: ‘what the heck is wrong with me?’”

But, why? Why doesn’t it feel good to be mean to a bully back? The truth is, that inner critic is connected to another part of me, the hurt inner child.  The hurt child, who, in order to mask her own pain, lashes out at others instead. If I were to stoop to her level and bully her back, I’d really be bullying my inner child. Instead of being mean to her what she really needs is for me to show her some empathy, compassion, and love.  She needs a friggin hug!

If I stop and mentally imagine giving that hurt inner child a hug, it brings me to tears quite easily.  The wounded part of me releases the pain, while present day me comforts her.  It’s a whole storm of hurt and compassion and vulnerability, all happening inside of me. And, in the end, I feel some relief.  The inner critic goes quiet.  She got what she really needed, understanding and connection.

But what about all that judgement happening only a few moments ago, where did that come from? Why do we judge in the first place?

The answer is pretty simple: it’s to make ourselves feel better.  Because if we can put someone else down for messing up at work like an idiot, or looking like a tool in public, it saves us from the same fate.

At least, so we think.

But the truth is, we judge others over what we feel the most vulnerable about and what we fear being judged about.  We judge our own insecurities so harshly in others, because it helps lift us up.  “See, at least I’m not as bad as that person!” we tell ourselves. Giving ourselves a fleeting ego boost, a momentary saving grace. From what? You guessed it, that hurt inner child again. The more hurt she is, the more she lashes out.

Our inner critic has become our own judge, jury and executioner.

Some might ask, “How did the inner critic get like that? How did it learn to be so mean?”

The answer is that someone taught it. Who, precisely, varies person to person. But I can tell you this, we weren’t born into this world with the inner critic telling us these things.  The programming we received is what we saw modeled by the adults and environment around us from a young age.  Much of this programming comes from our parents and families, but also from teachers, coaches, friends, the media, and other sources.  Whether we saw them berating themselves, or others, or us, we experienced this critical mindset and internalized it.

Every time we were scolded, or told we messed up, or punished, without also receiving empathy, compassion, or a warm loving hug, our inner critic took deeper root.

This is not to say that it’s your parents’, families’, teachers’, coaches’, or friends’ faults. This isn’t about blaming. Besides, where do you think they got their inner critic from? It’s just part of the program of life.

I have yet to meet someone who doesn’t have an inner critic, but if you exist out there and you’re reading this, please call me and I’d love to take you out for coffee.  I have so many questions!

But I don’t think that person exists.

Returning back to my main point: the question at hand remains…

Why is this inner critic such an a**hole?

And why do so many of us experience this?

One thing that is truly evident if you look around is how we, as a society, are seriously lacking in the compassion department.  Our Westernized culture is often described as “a bunch of individualistic, greedy a**holes, striving to get to the top at whatever cost necessary.”

What does living in a world with a serious compassion deficit have to do with the inner critic?

The inner critic is there because it’s trying to protect us, like a mean older brother who picks on you, but is really trying to toughen you up.  The inner critic’s job, in actuality, is to keep us safe.  Safe from the unknown, bigger, scarier bullies that we may encounter in the rest of the world.

The inner critic figures, if it can be critical of us first, then we won’t put ourselves out there for the harsher critics of the real world. It attempts to minimize our hurt, by doing the hurting itself.

Yes, the inner critic serves a purpose, but is it really helping?

Some of you might say it is.  You might see your inner critic as pushing you to be a better version of yourself.  But I’d urge you to consider, at what cost to your self-esteem?

So now that we know that our inner critic develops in response to feeling hurt or scared and a lack of compassion, the antidote is clear: practicing self-compassion.

For example, what I could have said to myself yesterday in the midst of my binge tv marathon in response to my inner critic is something like this….

“It’s okay, Heather, clearly you don’t feel ready or in the right state of mind to write today.  That’s okay.  Don’t force yourself.  Nothing good ever comes from forcing something, you know that.

It’s okay if today you just need to relax and distract from the realities of the present world by watching some silly, old reality show of teenagers living their best life in Los Angeles trying to figure their lives out.

You’ll get to the post later.  You’re a good writer and you know you can do this.  Maybe next time, you’ll be kinder and more compassionate with yourself earlier, and you won’t procrastinate as much.  That’s another conversation we can have later.  But today, lay on that couch girl.

But also, let’s check in.  How are you feeling? Is there anything in there you’re avoiding? Maybe there’s some grief about this crazy situation we’re all in.  Maybe you need a hug.  Maybe you need a good cry.  Let it out.  It’s okay.  I promise you’ll feel better if you do”.

And you know what?  I bet if I had sat down and had that conversation with myself yesterday, this blog might’ve been written later that day. But that’s not the point.  The point is, I would’ve stopped and listened to what was really going on inside of me. I would’ve looked past the inner critic and found my hurt inner child.  I would’ve paid attention to her and given her what she truly needed, instead of just trying to numb the feelings with chocolate, bad TV, and snacks.

Here’s one last little tip for you if you find the whole giving yourself compassion thing difficult.

When you were a little kid did you ever make Christmas ornaments of yourself with your class? You know, where you take your school picture that year; glue it to an ornament; and decorate it with lots of glitter, markers, or dried macaroni?

I was 5 years old, long blonde hair pulled half-up, wearing a blue collared shirt and a sweet innocent smile, with globs of blue and silver glitter all around me.

I recently found this old ornament, took it out of my Christmas decorations box, and hung it over the desk where I work at home.  I did this to remind myself of the little girl in me who often needed more hugs and compassion than she got.  The wounded inner child who sometimes needs me to go back and soothe her.

I put that picture up because I would never talk to her the way my inner critic talks to me.

Instead, I imagine myself with her when she’s hurting and give her a hug.  I tell her everything is going to be okay, I’m here with her, I love her, and that she is not alone. I hold her until she feels better and then I leave.  I need this visual reminder sometimes because it can be so easy to forget who’s really trying to talk to me when the inner critic shows up.

Do you have a picture of yourself from a younger age you can dig out of the old photo box and put up somewhere you see it?

Can you visualize yourself at a younger age when you might have needed more love and compassion and give it to yourself?

That’s how you take on your inner critic.  They really aren’t an a**hole at all, just a scared and hurt little child. 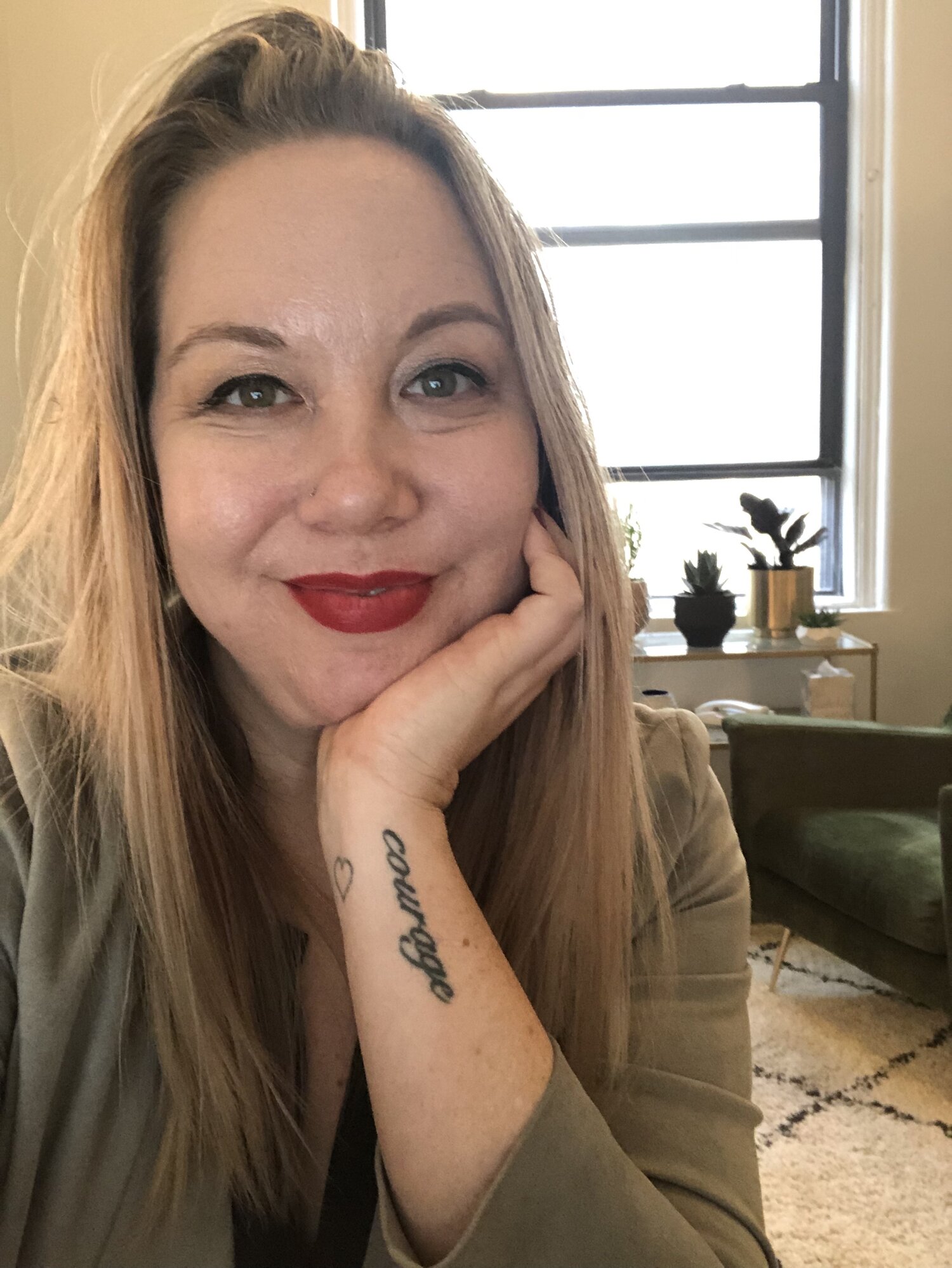 Dr. Heather Stevenson is a NYC therapist who works with career-focused individuals, who on paper have many of the things we call "successful", yet find themselves struggling with things like anxiety, burnout, depression, addiction, and relationship issues. Heather’s goal is to help you regain control again and live your life with more drive, passion, and intention. Working together, Heather will help you reconnect to your life and the people you love so you can truly thrive in all areas. Learn more about Heather and her work at her website.

Coping With Cravings And Setbacks On The Path To Recovery

How Do I Know If I Have Borderline Personality Disorder?

Health Anxiety Or Illness? How To Tell The Difference

During this time of uncertainty, our health has been placed at the forefront of our minds like no other time before. We have been told to wash our hands almost obsessively, to act as though anything outside could be infected, and to monitor our symptoms closely for signs of COVID-19. If you are feeling health anxiety at this time, you are not alone.